The single-engine Cessna was buzzing 1,000 feet above a Northern California burn scar as UC Berkeley scientist Scott Stephens shifted excitedly in his seat and peered out the window for a better view.

Down below, heavy machinery kicked up clouds of dust as commercial loggers attempted to salvage whatever timber they could, while a vast canopy of green, gold and brown rolled beneath the aircraft. Occasionally, this brilliant autumn quilt would be marred by burn patches.

But as the flight continued, the fall colors gave way to a desolate sea of gray and black. Trees now looked like charred toothpicks jutting from an ash pile.

That was the path, Stephens explained, that the North Complex fire took on Sept. 8 into Berry Creek, a rural Butte County hamlet some nine miles north of Oroville dam.

As California takes stock of its worst wildfire season on record, experts say that increasingly large and devastating fires have already altered the state’s iconic forests for centuries to come. Exacerbated by a warming climate and decades of aggressive fire suppression efforts — which left large areas of wilderness overgrown — these fires will continue to alter the landscape and, in some cases, will leave it more susceptible to wildfire than ever before. In other cases, the flames were likely to restore patches of wildland to their original state.

California’s diverse ecosystem — its lush coastal mountain ranges in the north; its flat, fertile valleys down the state’s middle; and its snow-capped spine of the Sierra casting a rain shadow over the sere Mojave Desert — has evolved over eons. That evolution has not stopped, however, and today it’s being influenced greatly by drought, fire and increasing temperatures, experts say.

During the summer, hundreds of fire-adapted Sequoias were destroyed in the Sierra along with conifers, with rangers speculating many of the trees may never return. In Big Basin Redwoods State Park west of San Jose, ecologists wonder about the long-term prospects for the forest behemoths as the cool, foggy environment they thrive in warms and dries.

In the Los Padres National Forest, years of repeated fires have already changed the vegetation covering the hillsides, increasing the fire risks for residents around them.

And now, after the North Complex fire, the area around Berry Creek can be added to that list, said Ryan Bauer, who leads the hazardous fuels and prescribed fire program for the Plumas National Forest.

“This was to the point that as you drive through that forest, there aren’t even large logs left on the ground, it pretty much cleaned up the surface fuels and left a big bed of ash with sticks sticking out of it,” Bauer said. “It’ll repair itself, nature is strikingly resilient, but it’s certainly not going to come back a forest.”

The North Complex fire began on Aug. 17 as separate fires that moved toward one another uneventfully until the morning of Sept. 8 when they merged and jumped a scenic river and sped out of the national forest and into rural Butte County. By the time the fire was fully contained Dec. 3, it had burned 318,935 acres, killed 16 people and damaged or destroyed 2,455 buildings, many of them homes.

The roar of such fires has been compared to a jet engine, or oncoming freight train. Bauer said those comparisons don’t quite fit.

“I think of it more as an avalanche of fire,” he said. “It’s not just rolling down the hill, it’s compounding itself and making itself worse and more powerful as it goes, starting more fires and then this cloud of embers ahead of it lighting additional fires.”

In the early and late parts of the fire, it burned moderately and slowly mostly to the north and east, creating that “mosaic” of three- to five-acre patches of char that Stephens was so excited about.

The California spotted owl appreciates the variety of a quasi-burned forest, where it can prey on small animals that are drawn to the new vegetation for food, Stephens said. Fully developed trees like mosaic burns too, because they reduce competition for resources and burn away dead and dying ground litter that flames climb to reach the treetops.

But that type of burn was only about 25% of the fire’s entire footprint, officials said.

Most of the North Complex fire — like the other large blazes that have blackened more than 4 million acres in California this year — burned too much area too intensely to be seen as an overall benefit for California’s larger forest ecology, he said.

“The problem is it’s not small patches of forest, it’s large continuous patches that have burned under high severity, completely out of scale with what is desired,” Stephens said.

The first vegetation to return to the extremely burned areas will be grass and invasive shrub species like French broom and Scotch broom, which, despite their bright yellow flowers, are a threat to nearby residents because of how hot they burn and how close they grow together, making them a potential link to a wildfire transforming into an urban conflagration.

“You’re not going to want to leave it around,” said David Derby, forester for the California Department of Forestry and Fire Protection’s Butte unit. “That’s what we’re having around Paradise. It’s kind of green and pretty, but it is thick and flammable and it’s scary if it catches on fire.”

With time, some oak trees will regrow from their root systems, Derby said, but huge areas of conifers will not, as they rely on their foliage and cones to propagate and the fire was too intense for any of it to survive. The area was so thick with conifers only because of a century of fire suppression anyway, so burning an entire stand of them and giving oaks a leg up could actually restore the area to its pre-human settlement appearance, Derby said.

“It could be hundreds of years in some places,” Derby said. “You’ll have a big opening and things will start seeding from the edges and eventually it will fill in.”

In the near term, there are lessons from both the North Complex fire and Paradise in 2018 that could be applied to the lands around Berry Creek and Feather Falls, among other areas, to ensure that if and when fire returns, it’s less severe, experts say.

Along the edges of the fire’s impressive Sept. 8 run, what the fire didn’t destroy was proof that the fuel treatments — including removing dead fuel from the ground and trimming the lower third of tall trees — slowed the fire and saved homes, officials said.

In Quincy, the Plumas County seat, years of work by federal foresters and the local fire safe council made fighting the fire there possible, Bauer said.

“If those treatments hadn’t been completed, we would’ve lost a number of homes,” Bauer said. “None of them worked 100%, but with the combination of several of them, we were able to stop the fire spread in there.”

Berry Creek residents had been scrambling to accomplish similar projects since the Camp fire but were unable to find the support. Wind-driven fires are virtually impossible to stop because of their speed and unpredictability, firefighters say, but they can pose less of a threat to a community if a healthy, well-managed forest slows their approach.

That was a lesson learned the hard way in Paradise, which had been visited by fire only 10 years earlier.

The Camp fire exploded, in part, because logs and dead trees from the 2008 Humboldt fire were left to dry and rot where they died and fell, providing a jackpot of fuel to sustain a fire as it burns through the quick-burning shrubs and grass that are first to return, officials said.

Foresters should make sure as many trees around these rural communities are salvaged as possible, Bauer and Derby said, with that responsibility falling to various federal, state and local agencies depending on the location.

“Even with the major increase in wildfires that climate change models are predicting for us, there is a way that we can see forests persist in California into the future,” Bauer said. “It tells me we know how to fix the problem, and we have the tools. It’s just the scale is so staggeringly large … we’ll just see if we can be effective at the scale we want to be effective at if we want to stay in California’s forests.”

North Complex: Forest could take 100 years to grow back 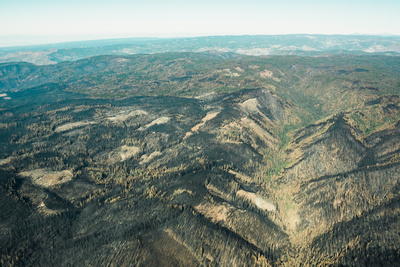 11/05/2020
State: CA
Mission: EcoFlight flew with fire scientists and Sierra Forest Legacy over the North Complex fire so that reporters could get a…
Read more